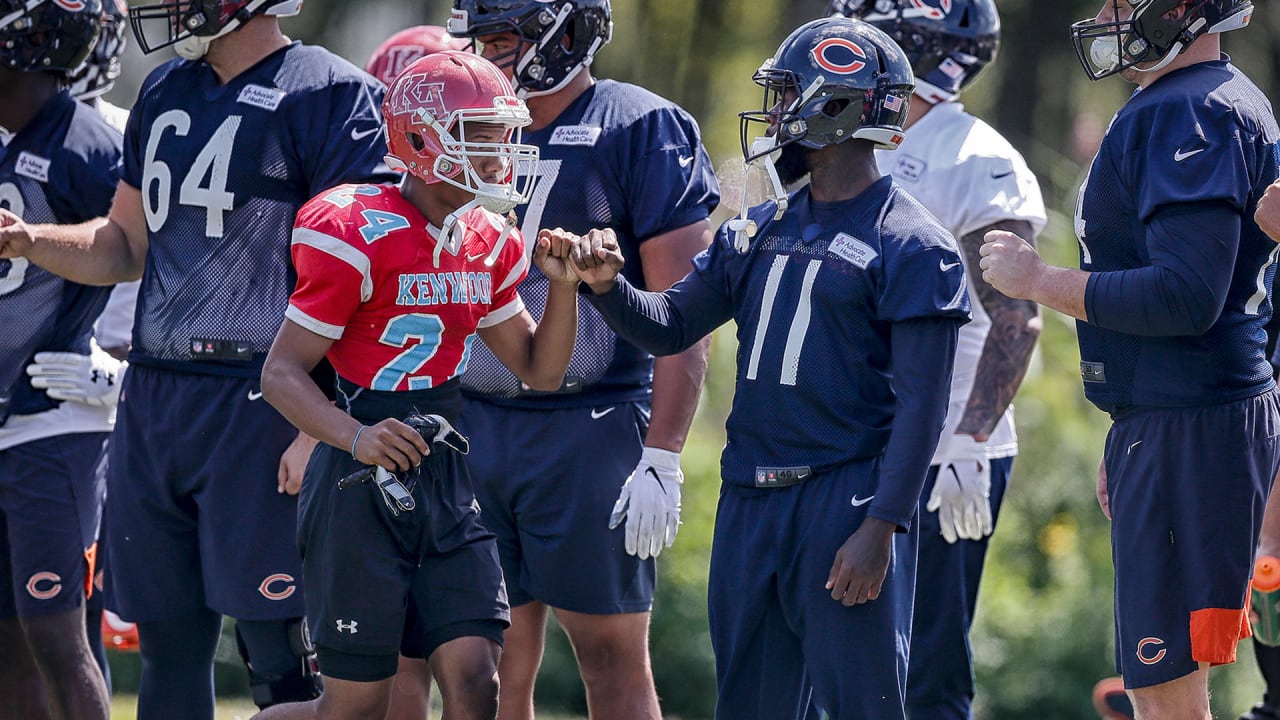 By holding Varsity Bears at Halas Hall, the team was able to reach out to the Kenwood Academy Broncos, a high school team located in the South Side neighborhood of Hyde Park.

The two teams have some similarities. For example, they’re both coming off significant turnaround seasons.

Coach Sinque Turner took over at Kenwood Academy in 2017. After going 3-5 in Turner’s first season, the Broncos rebounded last season, going 8-2. However, the team suffered an upset in the first round of the playoffs, which serves as a motivating factor going into this year.

Watching the Bears practice from the sideline, Turner, a lifelong Bears fan, felt that the team had given his players more things to consider.

“This is beautiful,” said Turner. “I think this is a great inspiration and motivation for my kids going into game week. This opportunity is amazing.”

Previous Varsity Bears events have had only the Bears on the practice field. This year, Kenwood joined the Bears for a group warmup, then split off to conduct their practice elsewhere on the campus. Since the Broncos will open their season this Saturday, Turner couldn’t allow the team’s trip to Halas Hall to only be about sightseeing.

“We’re still going to use this as a prep day because this is a game week for us,” said Turner. “So we’re not going to use it as a fun day or things of that nature. We’ll wait until everything is over, then they can have fun and get autographs and all that good stuff.”

After practice, both teams posed for a photo, and Kenwood players were allowed to seek out individual players.

Safety Eddie Jackson took the opportunity to ask the players about their college plans and encourage them to stay in school.

“When I was in their shoes, we didn’t really have the opportunity to come out here and talk to guys on NFL teams,” said Jackson. “That’s why I was sitting out there just talking to them because I know it means a lot.”

Hosting a local high school team for the second time in as many weeks, coach Matt Nagy reflected on the importance of high school football.

“It goes quick,” said Nagy. “No. 1, my oldest just started high school this year. You see that. I’m dealing with kids that age all the time. And then I go back to thinking about when I was coaching high school ball 11 years ago, 10 years ago, and so I realize that’s some special times there. As a player, some of my greatest memories, you learn so much, those are your brothers out there.”